In the Amsterdam Assassin Series, Bram Merleyn’s best friend and fellow musician, Zephaniah Catadupa, lives on an old freighter, The Mojo, berthed in the bay south of the Zeeburg peninsula. Living alone, with just his Rottweiler bitch, Shaitan, for company, Zeph is a devout Rastafarian and grows organic cannabis in one of the holds of The Mojo, selling the majority of this crops through Bram’s ex, Anouk, a sculptress with contacts in the art world. Anouk and Zeph have a platonic friendship, mainly because Anouk still hankers after Bram, and Zeph cannot separate his feelings from his loyalty to his best friend. While Zeph plays a minor role in Reprobate, the first novel, he manages to get himself more involved in Katla’s business in the second novel, Peccadillo, getting a bit more action on his plate than he’d bargained for.

The Mojo doesn’t exist in real life, but the bay where Zeph’s floating ganja hothouse is berthed does exist. Zeeburg is a peninsula on the east side of Amsterdam. Remote and near the IJsselmeer, the small island attracted people who like to live on the outskirts of society. The island has a bay on the south side, separated by just a narrow embankment from one of the busiest waterways in the world, the Amsterdam-Rijnkanaal, which connects Amsterdam to the industrial agglomeration of the Ruhr Gebiet in Rheinland-Westfalen, Germany. The Zuiderzeeweg, that crossed the bay and connected Amsterdam to Zeeburg peninsula, culminated at its highest point in the Amsterdamsebrug, arching high enough above the narrow strait of the Amsterdam-Rhine Canal to allow vessels with stacks of four sea containers stacked on top of each other. The Amsterdamsebrug was the first bridge to connect Amsterdam with its northern counterpart. Before the bridge was built, in 1952, all traffic was ferried over the Y and the waterways. The bridge was intended mainly for traffic, but pedestrians can cross the Amsterdam Rhine Canal by climbing open air staircases that descend on both sides of the bridge down to the embankments flanking the strait.

In Reprobate, Katla spots Bram using the stairs to cross the Amsterdam-Rijnkanaal to the tram stop on the other side, and surprises him with her Hell on Wheels. This is also the place where Katla shoots one of the antagonists trying to ambush her in Peccadillo. Despite the distance from the historic city center Zeeburg is quite popular with tourists for the excellent Zeeburg Camping, and with locals for the wildlife and nature that makes this area ideal for walking, cycling and rollerblading. To the south used to be one of the filthiest garbage dumps of Europe, with industrial waste sinking deep in the marshlands, but the area has undergone a rigorous clean-up and the dump site is now Diemerpark, a recreational park, mainly because the site was unsuitable for building houses. The ground has been contained though, and several meters of topsoil protect visitors from the remnants of the industrial waste. Asphalt bicycle paths meander around the former dump site and the park is extremely popular with rollerbladers in the summer months.

Entrepôtdok is the area where Katla has her apartment. Strategically placed in the center of Amsterdam with several access and egress points that allow for Katla to take different routes to her apartment, the Entrepôtdok is a historically interesting complex.

The Entrepôtdok is a huge complex of warehouses and a canal with the same name, between Kadijksplein and the Sarphatistraat, and running parallel to the Hoogte and Laagte Kadijk to the North, and the Plantagekade (quay) and Artis (the zoo) to the south. It’s the largest inhabited warehouse complex in Amsterdam.

The eastern half of the Entrepôtdok is separated from the western half by the Entrepôtdoksluis [locks] that are rarely used. The Eastern part contains the Kalenderpanden (Calender Warehouses, featuring the names of the months) and the former Municipal Power Station Hoogte Kadijk, now a museum and luxury apartments.

Entrepôtdok is part of the area called Kadijkseiland, which is connected to the other parts of the city by bridges. The bridge that is most often mentioned in the Amsterdam Assassin Series is the Nijlpaardenbrug (Hippotamus Bridge), a multi-coloured bridge for pedestrians and cyclists, built in 1987, that connects Entrepôtdok with the Plantage Kerklaan and the entrance of the zoo Artis.

The oldest warehouses in the complex were built in 1708. From 1827 until 1895, the complex became property of the Algemeen Rijksentrepôt and the warehouses were used to temporarily store non-declared goods in transit. This required the whole area to be sealed off. A wall was built around Laagte Kadijk and an arch with a gate was built at Kadijksplein. The eighty-four warehouses in the middle part of the Entrepôtdok were built during this period, 1830 to 1840. In 1890 the Entrepôtdok became redundant when the New Entrepôtdok was built at the Cruquiusweg. The warehouses became mostly empty space with some small companies occupying the lower floors, but the shoddy maintenance meant the warehouses were deteriorating rapidly. In the surrounding area a lot of buildings were demolished, but Entrepôtdok was saved because the complex became listed as a National Monument.

Converting the warehouses to apartments took a lot of work. After decennia of deliberation concerning the financial budget, a plan was made in 1980, with architect Joop van Stigt’s idea to gut the long dark warehouses, construct apartments against the façades around a communal courtyard in the middle, to provide enough sunlight for the apartments. The ground floor houses mostly companies and the basements have been converted into storage and parking spaces for the inhabitants of the complex. The entrances to these warehouses all bear names to Dutch and Belgian cities, and are now converted into tunnels that lead to the courtyards and the modern apartments at Binnenkadijken. The tunnel closest to Katla’s apartment is ‘Middelburg’, but the whole Binnenkadijken is connected, so you can also enter Binnenkadijken through another tunnel and cross over.

The first apartments, in warehouses 79-84, were delivered in 1984. Quite unique was not only that the apartments were rent-controlled, but the council also allowed the future inhabitants input in designing the lay-out of the kitchen and bathroom spaces. The rent for the apartments was between 300 and 400 guilders.

After the conclusion of this enormous social housing project, the warehouses between Entrepôtdoksluis and the Geschutswerf became luxury apartments. The Calender Warehouses were initially occupied by squatters, but the council had them forcibly removed and created 42 apartments in the 12 warehouses, costing about 800,000 euro per apartment.

The former Municipal Power Station was also converted to luxury apartments in 2001. The complex, designed by Liesbeth van der Pol, uses a support wall of the original coal storage to become the complex façade.

Under: View of the Nijlpaardenbrug, as seen from the quay. 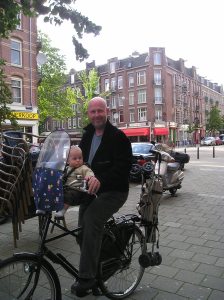 I’m a local and I ride my bike daily through the Amsterdam City Center, and I have some tips for tourists and out-of-towners:

If you think other people could benefit from this information, please share this post using the social media buttons below.

inspired by the music of David Sylvian and his collaborators

a writer's guide to typewriters

Music, Film, TV and Pop Culture News for the Mainstream and Underground

Around the world through books, film and music

Daily summary of the life/movie world.

Author of Paranormal and Urban Fantasy